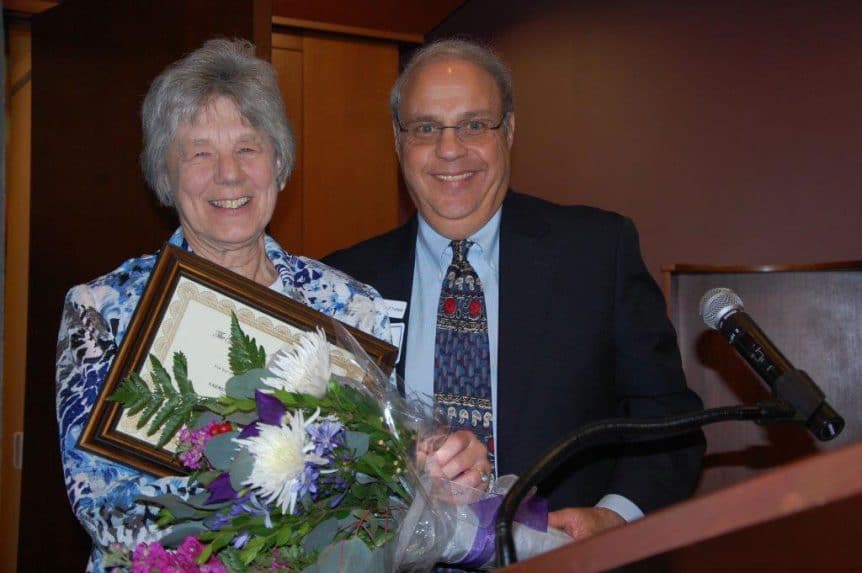 Shown in the photo left to right are: Honorary Parmenter Volunteer, Marilyn Walter of Wayland and Parmenter Board of Trustees Co-Chair, Tom Travers of Sudbury.

On May 22nd 2014 Marilyn Walter of Wayland, Mass. received the honorary Grace Johnson Volunteer Appreciation Award this year. She is often at Parmenter four to five times a week and has been a dedicated volunteer for the last ten years. Like so many others, Marilyn wasn’t familiar with Parmenter until her husband Ted became Parmenter’s first hospice at home patient in 1992. Both Marilyn and her husband were very appreciative of the personal care and devoted Hospice staff. This meant so much to Marilyn and her husband. Marilyn has been a Parmenter supporter and advocate ever since.

Marilyn knew she wanted to give back, get involved and “wanted to be sure the Hospice would be in existence when the day came that she would need their care.” Marilyn became a member of the Community Board when Parmenter was celebrating its 50th anniversary and planning a gala. She then extended her volunteer work to include a group of women known as the “lick and stick group”, who help with mailings, events, registration, you name it and they’ll do it. Marilyn was invited to join the Board of Trustees and assumed the role of clerk. Marilyn said she got involved with the “fun things” including parades, holiday decorating, and much more. She has met some wonderful people and cherishes her time at Parmenter. She recently stepped down from the Board to focus on other things.

Also honored at the time of the Grace Johnson Volunteer Appreciation Award time, Parmenter Community Health Care honored over 50 volunteers at their annual Volunteer Luncheon at Congregation B’Nai Torah in Sudbury. Over 100 volunteers play a vital role in helping Parmenter meet its mission. Through its homecare, hospice and community support services, Parmenter helps neighbors and friends achieve optimal health, and remain independent in their own homes for as long as possible.  Our volunteers help in many areas; the Food Pantry, office work, fundraising, special events, hospice care and at Camp Erin® Boston, our children’s bereavement camp. Our volunteers tell us again and again that they feel that they receive far more from their volunteer activities than they give.  It is one of those magical win-wins.

The Grace Johnson Volunteer Appreciation Award is named in honor of Grace Johnson (1925-2001), a longtime Wayland resident, who contributed hands-on work to numerous charitable organizations. Her quiet strength, her generous spirit and her seemingly endless reserve of commitment to making her community a better, more compassionate place to live earned her the respect and admiration of all who knew her.